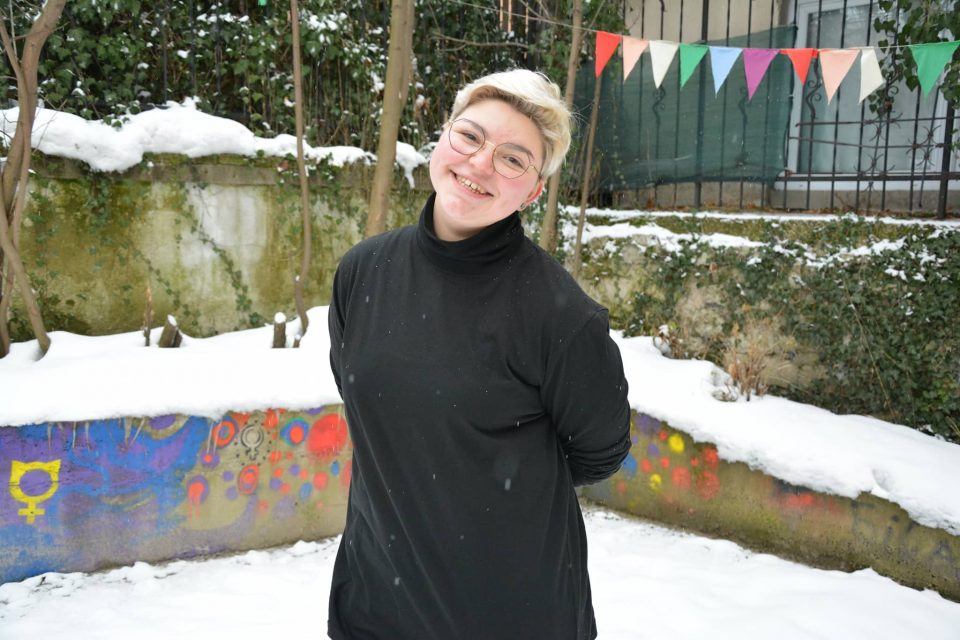 Twenty-year-old student Amina Imamović from Travnik became engaged in LGBTI activism out of the need to first and foremost explain her identity to her family. After coming to Sarajevo, she directed her activism towards the student population and joined the Sarajevo Open Center simultaneously. With Amina we spoke about the challenges of the struggle for equity, the departure of young LGBTI people from the country, and her motives for staying in Bosnia and Herzegovina.

Can you start by telling us about your activism? How did you end up at the Sarajevo Open Center and what have you done so far?

My work at the Sarajevo Open Center started four or five months ago. My story of activism actually begins in the year 2015 when I first went to Pitchwise, the Festival of Women's Art and Activism organized by the CURE Foundation. This is where I encountered LGBTIQ people for the first time, and feminism in general, and that was the beginning of my journey in all this. After that, a number of camps, seminars, and lots more followed. And then, when I started living here in Sarajevo to attend college, because I study at the Faculty of Political Science, Security and Peace Studies, I became more active at the Sarajevo Open Center and then Lejla [SOC activist] invited me to become a member of their team. LGBTIQ is a subject very close to me, because I am also a member of the community, that is, I am a pan-sexual person. To clarify what this means – it means I love everything and everyone, more precisely, I do not care about the gender or sex of the partner. Besides that, I am also a vegetarian, thereby I also fight for the rights of animals.

Why did you start doing major activism?

Honestly, that came by itself. It was not a decision like “I'm going to do that now,” but simply that was somehow my way. As Travnik's LGBTIQ community is non-existent, I was not in touch with people. I was the only one in my classroom who came out, and a few girls outed themselves to me, but that was it. There was another neighbor of mine who is gay, but he was also in Sarajevo. Then, when I started to meet the broader LGBTIQ community of Bosnia and Herzegovina, especially in Banja Luka, because Banja Luka is somewhat close to my heart, I began to connect with them and to grasp the essence of LGBTIQ activism, especially because I come from a very religious, traditional family, which considers being gay as “God forbid”. It may be everywhere, but “not in my house, not under my roof”. Then my activism firstly started with my parents – love is love, we all deserve to love and to be loved.

In fact, your activism started at home, because of the need to defend yourself?

Yes! Exactly. The initial response of my parents was first insulting, then threatening, and the last part was “do whatever you want, but when we die.” But I do what I want already. It resulted in doing guerrilla actions in Travnik with one friend, until he went to Ukraine – a gay man who went to Ukraine. And then here, simply when you have that community, you also have the strength to do something more concrete. Respectively you have the urge to do something more concrete because you are essentially not alone.

When you generally look at the population of young people in our country, what do you think are their common problems forcing them to leave the country?

Generally to me, as a young person, the problem is the lack of space to express yourself freely, to be what you are, to do what you want. Then, on the other hand, you have the fact that the employment rate is extremely low. It is a fact that Bosnian-Herzegovinian society is still very homophobic, and if you are an outed gay person you have a much lower chance of getting a job. You can have all required qualifications, but if your employer is homophobic, none of it matters. I as an activist am extremely annoyed by the passivity of society and the tyranny of the government that we have here. How much we are generally passive, how much we put up with everything. Everyone is jeopardized in this society. It's just that members of the LGBTIQ community, along with marginalized groups, are more vulnerable than others. We all put up with it and nobody speaks up, individuals who have been speaking up and fighting against it for many years now, they are here. Nobody to criticize with them and that frustrates me in general. 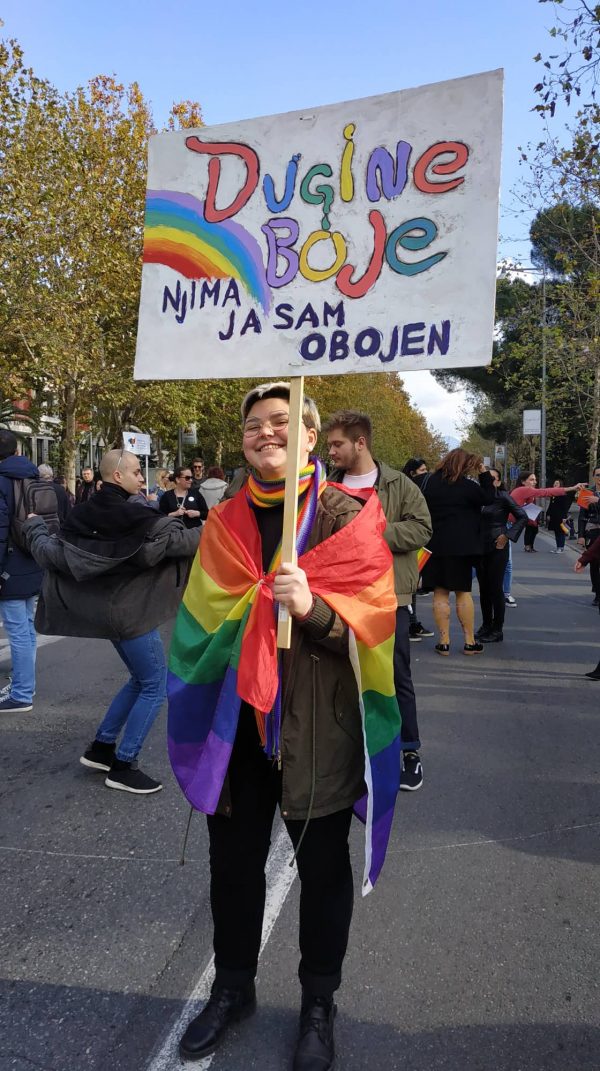 What do you think, are there any specific triggers that would make a young LGBTI person decide to leave the country, for example an assault or loss of work due to sexual orientation, or is it rather the culmination of many years of dissatisfaction?

Both! It's a matter of momentum and long-standing experience. Because simply, if we cannot have some kind of way out of this situation, of course we will find another way. That is, it would be another country. If the country I live in does not appreciate me, if the society I live in does not appreciate me, do they deserve me? It really just comes down to whether they deserve me. Do I deserve it as a person, to be treated like that, and to live in such a society? I'd rather go where I will be appreciated more, where I can be myself, and where I can be free. In the full sense of the word free.

Do you think about leaving?

Not so much for these reasons, because it is okay for me right now. For me, the struggle gives me a cause to continue living. But I'm not thinking about it. Because of some other reasons, I do, because I want to travel, I'm not a person who stands still, that's the only reason I would leave. But simply to me as a person, to fight, it gives me hope, gives me life energy.

And what would be the reasons that you think would definitely make you leave?

Total rejection, total dismissal from the family, there is always this possibility. Maybe also if my close friends left, then I would leave too. Because you will end up alone, with no one except yourself. But I do not think that the general dissatisfaction within society would be my reason for leaving. Because dissatisfaction, no matter how bad it sounds, creates the desire and the need to transform into general satisfaction.

Do you have close LGBTI friends who have left the country?

No, just that one friend from Travnik who has left, and that primarily due to unemployment because he could not find a job at all, but that is the only person from my friend circle who has left.

But will they leave?

When you talk to friends from the LGBTI community, what kind of opinion domineers when it comes to leaving the country? Are their reasons for leaving related to sexual and gender identities or rather to the general hopelessness present in the country?

It is more the general hopelessness. As I said, their identities are important, but are not the reason that would make them leave. In general, my circle of friends is pretty, again, young, we do not talk about it like “we have to leave” due to dissatisfaction, but that is perhaps the problem of my friend circle, because in the majority they are activists who figure that if they stay here, they will make a change. We want that change, we want to participate in it. It is more important to us that we participate in that change and make that change, than to leave, because by leaving we will not change anything.