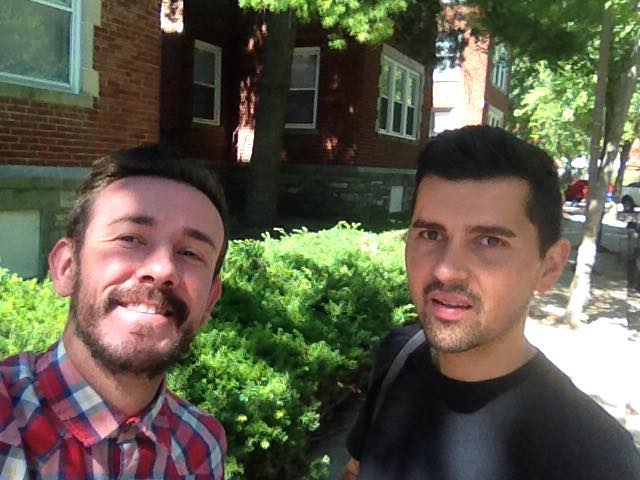 Being outed as gay in Bosnia and Herzegovina often leads to social stigma and condemnation and activists who openly, through work in the NGO sector, fight for the human rights of the LGBTI population, to which they belong themselves, often fear for their own security and existence. Continuous pressure and assaults, as well as the lack of opportunity to achieve basic conditions for normal daily functioning, are the reasons why today's 31-year-old Jasenko Suljetović from Tuzla left his country four years ago and, together with his partner Aleksandar Dragojević from Banja Luka, initiated the process of obtaining asylum in the United States of America. A process which, as they explain, mostly depends on their own informedness and preparedness for all possible situations, but also on the psychophysical stability of an individual once they succeed in arriving in the territory of the desired country.

Speaking up means getting labeled

Jasenko and Aleksandar met in 2010. As a gay couple in Bosnia and Herzegovina, they were forced to change their residence several times – due to the lack of opportunity to find a job and provide for themselves regularly, and also because Jasenko was often the target of assaults and threats for his LGBTI activism. As one of the founders of the first LGBTI association in Republika Srpska – the Banja Luka Association of Queer Activists, which was active from the years 2013 to 2015, he often had public appearances and, as a representative of the organization, advocated equal rights for LGBTI people. Looking back on his public activism today, he deems that he might have acted differently, but in a period when he was too young and unnerved by the discrimination he witnessed, there were no other options for him.

“I was a little selfish and ungrateful in this attitude towards activism and towards people around me, as I did not take into account the safety of my family or the safety of people around me, because it was important for me that this message is heard”, says Jasenko, but stresses that an LGBTI person does not necessarily have to be publicly outed in order to be menaced. “Every day when we leave the house we have to think whether someone will assault us, whether someone will hit us. I got a fist to my head so many times, just because someone did not like a jacket I wore, and they made an assumption based on that. ”

However, the breakthrough moment in which Jasenko decided to leave BiH together with Aleksandar was when Irinej, the Serbian Patriarch, filed a lawsuit against him for insults, after the Pride Parade in Belgrade in the year 2014. On that occasion, Jasenko had carried an image of the Patriarch as a banner with the inscription “I'll give you a million dollars to be mine”. The lawsuit itself was not a problem, Jasenko explains, because he knew that he did not do “anything bad”, but the fact that he was now even more of a target as someone who had insulted an important person and brought upon himself the anger of many, made leaving BiH a certainty. A period of fear followed, where he often left the house accompanied by friends only, and for a while he also wore a GPS bracelet which he could activate and inform his friends in case an attack occurred.

“All that period of time after Belgrade Pride was very strange and I did not have time to focus on emotions because the association was still operating. After Irinej's lawsuit, everything was somehow unreal and I was in denial about how dangerous it really was. Not only for me, but also for my family. As it is for any person from the community, to me fear was an everyday thing. Because of my father and elementary school, I got used to violence very early, but I always knew that violence would not be my end and that was why it was easier to overcome this fear. I knew I would be there. The thing that accelerated our departure was my first court hearing with Irinej, the Serbian Patriarch. That whole day, before and after the hearing, I anticipated my end. I thought for every step that it would literally be my last. After that day, everything became a preparation for departure and there was no room for emotion”, says Jasenko. 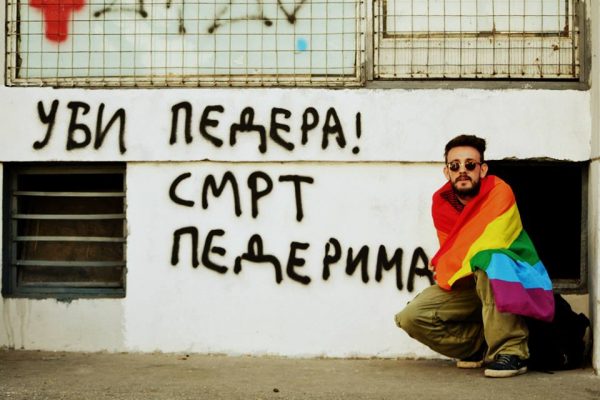 To the USA with a tourist visa

In order for the process of obtaining a permit to stay in the United States of America, in which Jasenko and Aleksandar live today, to be successfully completed, it is necessary, first and foremost, to be well informed about all situations that may arise. The two men explain that they departed to the United States by applying for the tourist visa, which was granted to them, and only upon arrival in the United States they filed an asylum application. All information, about the tourist visa as well as subsequent procedures, can be found on the internet. “The internet is somehow our best friend. Depending on the country the person wants to emigrate from, official pages of the government and government agencies are the most reliable sources of information. Besides that, also non-governmental organizations advocating LGBTI rights.” Upon arrival in the United States, according to the law, there is a one-year period during which one can apply for asylum, Jasenko explains. It is possible to engage independently in the application process, but Jasenko and Aleksandar from their own experience believe that it is better to hire an attorney. Also, although the application is to be submitted only after physically arriving in the territory of the USA, it is essential to prepare all documentation and evidence while still in Bosnia and Herzegovina. “It's not enough to just arrive and say ‘I'm gay’ and get asylum based upon being gay. Every country in the west will look for some evidence of your endangerment in your country of origin. You will have to provide evidence that you are endangered and that life for you, your partner, your family is not possible in the country you come from.” Jasenko had material evidence that he was exposed to assaults in Bosnia and Herzegovina because of his sexual orientation, but Aleksandar, who had also suffered such threats and assaults, did not have any material that would prove it, so they decided to marry in order to submit a joint application to stay in the United States of America. Without marriage, they think Aleksandar's chances of obtaining asylum would be small.

The evidence material can be any written or photographic trace that an LGBTI person is exposed to threats, pressure and assaults in the country he or she wishes to leave. Among such evidence are photographs of injuries, police reports if the assault was reported to the competent bodies, as well as verified witness statements.” Many LGBTI people were in a situation that, when they went outdoors during the day or night, one of them was a victim of assault and the people that witness this can write a statement for a friend, which can be authenticated by the notary and would serve as proof”, says Jasenko. Important documents are also reports of non-governmental organizations and international agencies on the state of human and LGBTI rights in the country one comes from.

“In addition to preparing all documents and checking current immigration policies and laws, every person should be ready to be rejected and have an option where to go to if this happens. For example, if at the US customs they tell you that you cannot enter the country, you can apply for asylum immediately on the spot. If this asylum is denied, you have the right to ask to be sent to another country other than your country of origin”, explains Jasenko.

The start is probably the hardest in the whole process, especially if a person leaving their country has no one to stay with until he or she is able to find accommodation and work.

They were lucky, because a friend reached out to them and offered them to stay in the basement of the house she rented.

An aggravating circumstance is also the impossibility of legally working during the first period of staying in the USA because, from receipt of the application for asylum, 150 days must pass to get a work permit. Additional benefits are, of course, if a person has a certain amount of savings when arriving in the new country and if he/she speaks the language of the given country. 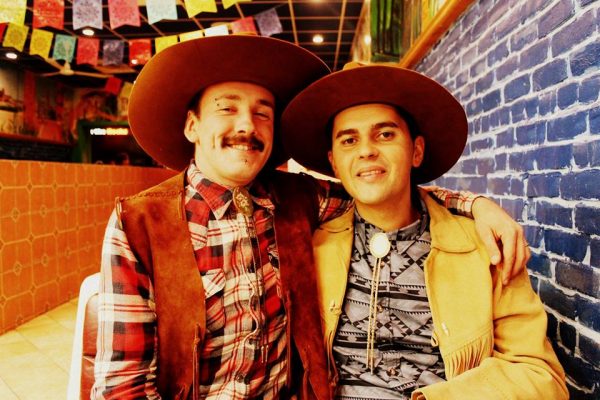 Years will pass before visiting BiH

When they speak about leaving BiH, Jasenko and Aleksandar do not hide that they are sorry they were forced to take such a step in their lives. They consider the Balkan area, although it has driven them to another country, close, and have a need to visit it again. This, however, will not be possible for a few more years, because in order to travel it is necessary for them to first become American citizens. This process usually lasts seven or eight years.

“Who can say he is happy to have left his country. We all deeply mourn that we have to leave our country, because where you are born of course, everything is yours. We left when we were thirty years old, more or less. Everything you are used to and learned about life is in your country, then you leave it and you start from scratch again”, says Aleksandar.

Today, their life away from the country they were born in has become a life where they acquired basic human rights. They live together as a married couple, are employed in jobs they love and which bring them sufficient income, and no one condemns them because of what they are. As they say, even if somebody thinks something bad about their way of life, they must keep it to themselves, because the law now protects them.

“The perspective of good and bad sides depends on what kind of life people expect when they leave BiH and their ideologies. I do not see the bad side of our departure. The main thing, of course, is the fact that Aco and I live without fear and that we have and can demand equal treatment and get it. The circumstances that made us leave, and because of which we cannot go back, are very bad and that's the difference. The bad side would be that initial period of a new life and the fact that the first years were accompanies by a lot of stress and renunciation, dozens of different jobs, and if you do not want to be in debt, very little money. Financial stability is very important to me and I have firmly followed this capitalist-corporate pattern. However, I have prepared and assimilated very well and have begun to harvest the fruits of these renunciations. I found a great job in the IT sector. I am out as gay and I'm not afraid I'll be fired if I talk about my husband. My progress is exclusively related to my work. Aco continuously performs for various opera houses. Our cats are happy. Our dream is near.”