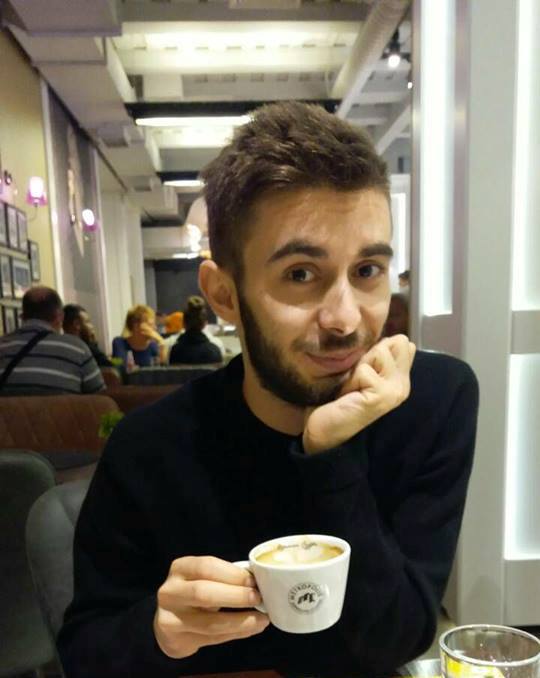 Mirza Halilčević is an activist and journalist from Tuzla whose journalistic work is devoted mainly to writing about the rights of LGBTI people in Bosnia and Herzegovina and the region. He is one of the founders of the Tuzla Open Center and today he lives, works and writes in Sarajevo. With Mirza we talked about elitism and class privileges that affect members of the LGBTI community and all other Bosnian-Herzegovinian citizens, about the significance of the integrity of human identities, and about him (not-) thinking about leaving Bosnia and Herzegovina.

What is your motive to work on LGBTI topics as a journalist and activist?

There are probably a few of them. The fact that I am gay is not enough for me in the sense that it has defined and professionally directed me. That by itself means additional authentic experiences of living. All this had to be transformed into a professional experience, through discipline, ethics, responsibility. First of all, this enabled me, and opened up the space for me, to listen to other experiences and to present them in the media space. My personal experiences, whether negative or positive, were just a trigger that made me think about how I could contribute to people who have challenges somewhat similar to mine. It happens that people come up to me, or that acquaintances meet me in the street, and they react to what I wrote. And mostly, these are experiences of people who have identified themselves, people who might have recognized themselves in the stories I shared. I am trying to present the story with the utmost professionalism and responsibility. It seems to me that this is what people recognize. Without sensationalism, without fetishism, without general space, but on the other hand, very real, raw, emotional. People feel relieved to see that there is someone else who shares, and is successfully overcoming, challenges similar to theirs. It is extremely important to publicly talk and share experiences.

What do you see as the biggest challenges that the LGBTI community in Bosnia and Herzegovina faces, which bring individuals to leave the country?

It is very difficult to speak about a form of isolated discrimination. One form of discrimination is almost always intertwined with other forms of oppression. The dominance of a capitalist-oriented society is a class, or a class divided society, although it does not necessarily connects to sexuality alone and to discrimination on that basis. There is, of course, the inevitable gender, in personal and political terms. The way we feel about our body, the way we express our physicality, our birth characteristics, our gender performativity. Also, larger cities, urban centers, represent a bit more freedom than smaller rural places. These are some categories that significantly determine the lives of LGBTI people and the surface of the maneuvering space, space for freedom, for movement. Imagine the life of a feminine, poor gay boy from a village. No side of society is fond of him and often the LGBTI community dismisses him as well. Security in capitalism, in a corrupt, materialistic society, has its price. When you have money, you can buy, rent an apartment, where you will feel free, in case your parents kick you out. You don’t have to think about coming out at work or not and whether you will lose your job, because you already have security. Of course, these are purely existential needs, which make sense if we talk about the primary challenges of LGBTI people. But we need to know that the quality of our life does not necessarily have to be determined by our material status.

It is very difficult in such an atmosphere, in a post-conflict and poor society, in a traumatized environment full of political instability and insecurity, to expect a movement of unconditional LGBTI love. In addition to all these challenges, one must face both disapproval and sexual marginalization. In such a climate, how is it possible to think about partnership, about love, about forming a family, or, ultimately, to think about yourself, your own authenticity, individuality, freedom, ambition, and ultimately sexuality. There are so many traumas in the LGBTI community that are caused by auto-homophobia only and it is not the product of one homosexual mind, but of the entire system which I have described. How to, within all that, love yourself, members of your LGBTI community, your partner, friends, well that is courage and strength!

You have not even thought about leaving Bosnia and Herzegovina yet – it is a little strange to hear that in an atmosphere in which almost everyone has at least at some point thought of it?

It is strange for me too. I don’t know. I don’t really know what it means to leave. Where should I go and how do you know where you should go. I don’t want to do anything by default, by automatism. There are many countries I would still like to visit. In many, I would love to live a little while, but this is not the idea of a final departure. I am not trying to banalize the phenomenon of the exodus of young people who have left Bosnia and Herzegovina, but the whole narrative of leaving to me seems somewhat fatalistic and exclusive. Let people leave, let them travel. People all over the world travel, move away when they get better business opportunities, people are mobile and they should be, but I am just scared of the idea of leaving by default, leaving because that is what you need to do, leaving without a second thought. Until then I am living in Sarajevo, I am trying to get as close as I can to people, close to ordinary people. Ordinary human destinies are close and dear to me. It is very important for me to be close to my neighbors, my family, my friends, to people who are not part of the LGBTI community, to people who don’t have such open-minded attitudes. And that is something that keeps me here. I try to put that human characteristic in front of all categories because my sexuality is just one part of me. Of course, a very important part of me, but much greater than that is, for example, my civic responsibility, responsibility for other things.

Do you know other members of the LGBTI community who were forced to leave the country because of their great exposure and activism?

Yes, yes, I do. I mean, very extreme cases come to my mind. There were really horrific cases in which for some people life was simply not possible. Threats, being called out in the streets, calls for lynch, hate speech, collective excommunication. This is not the first time that people are driven away or deprived of their right to a dignified life. The same thing happened to many who did not accept collective national ideas. These are very similar principles of betrayal of a collective delirium and beliefs. Luckily, I come from a very supportive family, work in a supportive environment, have supportive friends. I deeply empathize with people who have suffered such violence. I can understand that, although I did not have such experiences. But I know people and I think that, if we speak exclusively of homophobia or asylum seekers based on sexual orientation and gender identity, those were cases where there was no room for compromise. Today, of course, there are cases of many LGBTI people leaving Bosnia and Herzegovina because of, among other things, homophobia, but, let's say that it is not the primary motive, that is, it is not the basis for asylum seeking. And I will repeat again, I don’t want to think about compromise and whether these people could stay or not, whether it is wrong or not. I think that everybody who at one point thinks he or she should leave, should do that. To me, that is quite legitimate.

Is there anything that could make you decide to leave?

I don’t know. I really don’t understand that idea of ​​leaving. Like, where to go, is there anywhere you can go? And what then, when you leave? I don't know. I have had the opportunity to travel and today I also try to travel whenever I can, as much as my available free time and my budget allow me. I don’t feel solely tied to Bosnia and Herzegovina. I love Sarajevo, although I was not born or raised there. I equally love the village near Živinice where I grew up and I always happily go back there. I have friends worldwide and we visit each other from time to time. I don’t feel that everything mine is absolutely tied to Bosnia and Herzegovina. A big part of me certainly is, given that a lot of people I love currently live here. Our common memories are here. My memories are here, but a big part of them are within me. I think probably loneliness could force me to potentially think about leaving. Loneliness in the ideas I promote. If at some point I felt that Bosnia and Herzegovina was damnable for the common man, that it was against the common man and that nobody stood up in their defense, then I would ask myself… Mira Furlan explains the motives of her departure from Belgrade and how she is currently living in Los Angeles, and there is no longer a place where you can go or run to – except within oneself, one's little garden, one's little space of freedom. I believe in that – I believe in small revolutions, small spaces of freedom, with the people we love and who love us, wherever that is, and for me that happened to be, at least in this period of life, right here in Sarajevo.